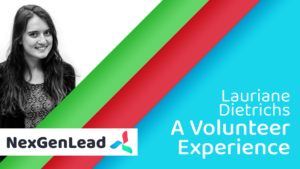 The team behind our NexGenLead program is made out of so many devoted people who worked hard to make sure the project is a success. The contribution of our voluteers was especially valuable and today we bring you the testimony of Lauriane Dietrich – one of the volunteers who was a part of the project from the start and whose hard work made NexGenLead into reality.

When the pandemic hit back in March, I started like a lot of us to spend more time on social media. As part of oikos I had been following their social media and I found this announcement of a global virtual event that will later be called NexGenLead.

I reached out to Marcelo (the project leader), we had our first call and I embarked in this journey without even realizing everything that was going to happen.

We started to work on my favorite part of project management, which is the brainstorming phase throughout the first sessions. We had a lot of interesting discussions about the format we wanted for the program. From the start were quite ambitious about the way we wanted it to be like. Early on, we used a few tools like Word Clouds to come up with the best name and the frame for the program: would it be a conference, a webinar, workshops maybe?

What I liked most about our discussions is that we started off as a small group in which everybody could offer their perspective. Though, at times, it felt that the project was really ambitious and that it would be hard for our small team to handle everything. Therefore, in summer we realized that we needed to change our approach. Since the idea was to make the program oikos’ flagship event for the autumn of 2020, the organizing team was expanded with the oikos International team.

And this is when everything changed. We went from a team of 4 people to a team of 23, with a better structure and clear deadlines and objectives. I was assigned to the communications team which was what I wanted to focus on. Though I missed having a full overview on the project, I deeply appreciated working with the communications team and going in details of the strategy and the content creation.

When we got really close to the opening ceremony of the program, we were in a bit of a rush. As project was about to kick-off we had quite a few last-minute tasks that popped up that we needed to cover. I ended up spending much more time volunteering than I originally planned and took on some roles I wouldn’t have expected to take. I had the chance to interview two responsible leaders, and to work on video editing for social media. I had a lot of great opportunities to grow my skills and to take on various responsibilities. But to be honest it was also the most frustrating part, if you are reading this and you have already organized an event, you know what I am talking about. A lot of things can go wrong at the last minute and lead to sudden panic. But I was impressed with the solidarity between the team members. Everybody was eager to help each other and make sure we would be able to meet the deadlines.

When the program started and I had the chance to be both an organizer and a participant in the program. I met a lot of passionate people and learned so much about myself thanks to tools like the Competency Assessment for Responsible Leadership test. This framework was used throughout the entire program and allowed us to see the progress we made. I had a lot of meaningful conversations with people I would have probably never had the chance to meet in real life. As NexGenLead was a pilot program we constantly monitored and reevaluated it, finding new innovative ideas to engage with the participants and ways of encouraging them to participate more actively.

At the closing ceremony, I realized how many people we inspired with the program and the changes it brought the lives of students participating. Of course, there’s always room for improvement – we felt we could have had more participants, we could build better partnerships and could have created an even better program. But overall I felt this sensation of satisfaction! As the program ended, we want to keep the link with the community we created thanks to squad calls and hopefully we can look forward to the NexGenLead 2 some time in the future…

Being a volunteer for NexGenLead was my best decision of 2020! I learned about responsible leadership and I had the opportunity to interview inspiring individuals. I participated in the organization of a virtual event which was a first time for me. I already organized onsite event but never online and it is an experience that will, no doubt, benefit my resume. I also took on responsibilities by handling the Instagram account. It is an experience that will be useful in the future and for which I will learn from both the success and challenges we faced.

Lauriane was a part of the NexGenLead team as a volunteer