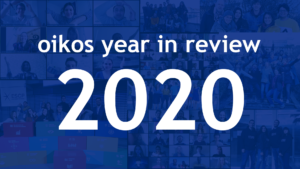 As 2020 comes to an end we take a look back at everything that’s happened in the oikos Community in one of the most challenging and unusual years for oikos. It’s a very significant year for us as it showed our organization’s ability to adapt to the new challenges in a short time, the resilience and togetherness of our community in the toughest circumstances to always keep creating positive impacts by embedding sustainability in education, work and day to day life. In many events we attended we noticed the willingness of various stakeholders to collaborate with youth. Those words have been already followed up by actions, since we have been as solicited as never before to represent the youth in various events across the globe. In this article, we will be reviewing the year chronologically and highlighting the most important moments and highlights of the last twelve months.

The first month of the year was pretty busy and full of action, perhaps indicative of what 2020 would look like at oikos International. The year started off with the new oikos International Board meeting for their first Strategy Meeting in Oberentfelden, Switzerland in the early days of January. It was this meeting that prepared and set in motion the strategy for the year ahead. It was followed by the ESCP Conference on Sustainable Innovation, where we were joined by a few oikos chapters in the event co-hosted by oikos Berlin. oikos International President Clementine Robert represented the organization with her speech, as the Curriculum Change team would go on to host a workshop – the first of many Curriculum Change sessions to follow this year. Finally, maybe the biggest highlight of the month and even the year was the launch of Positive Impact Rating (PIR) at the World Economic Forum in Davos. The new type of rating, conducted by students and for students, was launched after two years in the making during Deans’ multi-stakeholder Discussion On the Future of Business Schools Rankings and Ratings. The event saw the first ever PIR Report, presented by our President, with 51 business schools participating in the rating.

We maintained the same tempo going into February. oikos International was once again represented by the president at the Integrating Sustainability into Business Education panel discussion organized by AMBA at the Imperial College in London. Joined by business schools’ leaders from around Europe, oikos was invited to bring in the youth perspective on the topic. This month we also launched the first ever oikos In Residence, taking place in Basel, Switzerland. An entirely new format initiated by our Curriculum Change team brought together a team of representatives from oikos chapters, oikos International, and Rethinking Economics to discuss the relevance of a re-envisioning of what is taught in typical business bachelors programs. February also saw the creation of the oikos MOOC Library – with the purpose of making a wide variety of Massive Open Online Courses on sustainability offered across the globe easily accessible to our community by gathering and categorizing them in one place. This month oikos and Clementine Robert were featured in the FInancial Times article MBA students and employers demand ‘profitable solutions for people and planet’.

We started off the month with an oikos Leadership Program (LEAP) mid-term meeting in Munich, Germany for the 2019/2020 cohort. March was truly an unprecedented month in the history of oikos. The outbreak of the COVID19 pandemic by the end of the month meant it was no longer safe to host onsite events, forcing us to adjust some of the events originally planned for spring and shift them into an entirely online format. However, despite the difficult circumstances, our community persisted and showed its strength and togetherness, easily overcoming everything the situation can throw at us. Moving our activities online had brought us more together and with our experience of moving towards working fully digitally, March was the month of planning and adapting new to the format of our traditional events. With the situation developing some people wasted no time in creating initiatives to deal with it and we joined some of those people through GoodAfterCOVID19 initiative.

By the end of March everything was set for an exciting month ahead which started off with the second edition of the oiConference: Developments in Finance and Sustainability. With the previous edition being also entirely online, even months before the pandemic, the organizing team now had a growing audience as most of the world had gone into lockdowns and were looking for new ways of learning and engaging from home. Similarly the second edition of the oikos Curriculum Academy, previously being part online-part onsite, became a fully online and interactive program. The three-day workshop gathered many students, early-career researchers and professors to explore collaborations for driving change towards sustainable curriculum. April featured truly an abundance of events which followed. The first online and ‘standalone’ Chapter Days took place independently from the Spring Meeting and saw the community get together to exchange and learn from each other. The Legislative Assembly followed, gathering oikos chapters to elect the new oikos International President and vote for the full status of oikos Bangalore. We also hosted the first virtual Alumni Weekend, gathering oikos Alumni from around the globe. And finally, the Spring Meeting 2020 on the topic of inclusive development was hosted by the oikos Baku (Azerbaijan) team, who went through great effort to shift one of the biggest events in the oikos calendar to the online format.

Following the busy April, May was much more relaxed at oikos International. This is when we shifted our attention to local oikos chapters. The main focus was on the cross-chapter collaboration. Following the two chapters’ previous successful ventures, oikos Hong Kong decided to team up with oikos Suzhou in order to transform its flagship project Sustainability Impact Case Competition into an online event. That way, the two chapters would not just make it safer for participants, but also increase the project’s reach in the Greater China Region. Meanwhile in Austria on the other side of the globe, oikos Graz and oikos Vienna came together to organize a number of online events showcasing how chapter collaboration can bridge the distances and make greater impact.

This year marked the growth of our oikos International Team, with new faces stepping in throughout the year. But the most significant addition marked the forming of a dedicated Positive Impact Rating (PIR) Team. The PIR’s own team meant reaching a greater number of business schools with the rating and better use of it as a tool for improving business schools. Not long after, PIR was featured across two days at the Virtual PRME Global Forum contributing to the broader discussion about ways that universities can reimagine their sustainable impact through management education. Students played a central role in the discussion, with Clementine Robert, oikos International President, once again bringing the youth perspective and representing our organization.

As summer came, many around the world were under some sort of restrictions regarding public gatherings, so we decided to bring oikos In Residence to their own residences. The second edition for the year, oikos In (your) Residence was in many ways different to the one back in February. With five workshops spread out over two weeks we had a platform to analyse, brainstorm the methods and ways to implement curriculum change. This month we also launched the Alumni Hub to serve as the one place for everything about the oikos Alumni community and strengthen the community itself. In July we had a proud moment for our community as one of our chapter’s work had gained recognition to its university at the International Green Gown Awards.

In August we partnered with Goodwall on the Better Together – the five-week program, specifically designed to help young people prepare for the post-COVID-19 world of work. As the government measures slowly started to ease, near the end of August oikos Alumni community hosted The Unconference – both online and onsite – for the first time since the pandemic started. In safe conditions in line with the government rules, with participants’ health as the biggest priority, the team hosted twelve workshops over two days in St. Gallen, Switzerland. Our Team also participated in the writing of The SAGE Handbook of Responsible Management Learning and Education.

As the new semester started, Positive Impact Rating saw the launch of the 2021 edition of the rating, opening the registration which lasts until January 15. oikos Tbilisi hosted virtually the regional Central-Eastern European Meeting in September exploring the ways of transforming business and education. This month oikos International President Clementine Robert was once again featured in the Financial Times article Business schools learn to ‘do the right thing’ on sustainability, focusing on the changes business schools are undergoing as well as their growing concerns over environmental impact.

October was a busy month with preparations for the NexGenLead well underway. It is when we started hosting interviews by the program’s participants with responsible leaders from around the world. These interviews remain publicly available for everyone and you can explore them here. This month we also launched the oikos Alumni Impact – an entirely new segment on our website dedicated to the most inspiring stories showcasing the work and impact of our entrepreneurial Alumni in the world of sustainability. This month we were also represented at the Partners For New Economy(P4NE) Webinar by a member of the oikos Community.

In November we once again picked up the pace, starting off with NexGenLead – our flagship event for the year – the virtual program aimed at transforming students into responsible leaders. Over the course of three weeks participants from around the world and all walks of life joined the many sessions on responsible leadership and sustainability. This month concluded the oikos Case Writing Competition, with the three winning cases announced. Asian oikos chapters joined forces to organize the oikos Asia Meet online together. At the EAUC Virtual Conference we were represented, this time by a member of the community who chaired a panel discussion. By the end of the month we hosted another Chapter Days, followed by the Legislative Meeting where the oikos Community elected the new Board of oikos International for 2021. At the meeting oikos Hong Kong and oikos Lisbon were approved the full chapter status, with another oikos chapter in accession opening in Alexandria, Egypt.

With a new board chaired by the new oikos International President Sophie Charrois fully in office, we entered December as a fully remote organization. As the oikos International President – by then the only position that remained working at the physical office in St. Gallen – switched to working remotely, we finally closed the years long process of taking our work into the digital space.

With this challenging, but fruitful year coming to an end we look forward to 2021 and what it has in store for us. 2020 gave us many things and brought about many changes in order to adapt to the new normal. We will take the learnings from it with us and make the best out of the next one and although we’ve had to adjust our plans for 2021 accordingly, we don’t plan on slowing down in pursuing the oikos Mission and Vision!