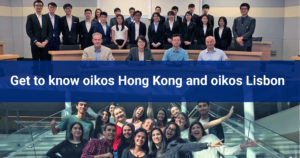 We are delighted to announce that oikos Hong Kong and oikos Lisbon have been given the full chapter status following the vote at the Legislative Meeting on November 29.

A chapter gaining the full chapter status is always good news at oikos, as it means our family grows ever stronger. But it is also much more than that. It represents the appreciation of the oikos Community for the hard work their members have put into evolving the chapter but also the impact their projects have on the respective local universities. Taking a chapter in accession from its founding to full membership is never easy. It requires hard work and dedication of it’s members, but ultimately, that only makes the reward even more deserving. When it comes to oikos Hong Kong and oikos Lisbon, the accession has been quite imressive, but it’s just a small part, an ouverture for the great oikos journey that lays ahead.

oikos Hong Kong was founded in 2017 at the Hong Kong University of Science and Technology and since then has organized many projects on the local campus. The chapter is the first and only society promoting sustainability in economics education in their home city. Over the years, the chapter’s projects impacted hundreds in Hong Kong and the Greater China region. With a constantly growing membership, oikos Hong Kong has taken on a number of projects aimed at educating students on sustainability. One of the ways to do so is through inviting industry professionals to offer students a new perspective and engage them into sustainable topics. An important aspect for the chapter is innovation, which is also at the center of its flagship event – oikos Sustainability Impact Case Study Competition where students get to study the real life corporate cases. This year’s Competition marked a special ocassion as it was the first ever regional sustainability case competition in the Greater China region, organized in cooperation with the fellow oikos chapter from Suzhou. oikos Hong Kong is one of the pioneers in online events when it comes to the oikos Community, drawing large audiences to its online events. The chapter has also been active internationally, joining forces other Asian oikos chapters to organized the latest oikos Asian Meeting in an online cross-chapter collaboration effort. oikos Hong Kong has big plans for the future with an expansion to other universities in the city, forming an alumni network and increasing its impact in the Greater China Region.

oikos Lisbon is one of the youngest oikos chapters having been opened in 2019 at the Nova School of Business and Economics in Lisbon. The first ever Portuguese chapter has a history going all the way back to 2011, when a group of students formed Green Nova – a student club to address the environmental issues at the university. But as those issues go beyond the local community and exist on a global level, the club realized the need for a global cooperation and action. Hence, in 2019 it joined the oikos network and became oikos Lisbon. The chapter has put hard work into making the campus more sustainable through consulting, creating guides and taking action to reduce waste. oikos Lisbon is also very active digitally running it’s own blog on sustainability, the Nova Second Hand Collection page on social media, and since recently starting an impressive original podcast – Green is the new black In the field of curriculum change, the chapter has worked with students, from elementary school to the university in effort to integrate sustainability into education. An amazing achievement was made in reaching out to Nova School which since recently added Environmental Economics course to its curriculum. For the future, oikos Lisbon has great plans to bring more sustainability to the campus. Curriculum change remains an important part to the plans with the goal of further integrating sustainability into business and economics education.